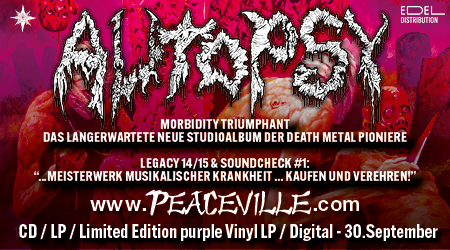 Die Band über das Video:
"We are very proud to present our new music video "Mission Commando". The speed and intensity of the song fits very well the theme of the video that documents our recent trek through Europe. Touring is a relentless fast paced life style and this is the perfect soundtrack to go with the images we captured last fall. Enjoy!"

War has always been an intrinsic part of humanity. Whether it is huge wars involving entire countries, or the small wars we all fight everyday to survive, it is fair to say that war has defined humanity.

One of the definite treatises on war is Sun Tzu’s ‘The Art of War’; a book still in print to this very day. On the use of music in war, Sun Tzu writes: “Gongs and drums, banners and flags, are means whereby the ears and eyes of the host may be focussed on one particular point.”

Now, we have WarCall, who not only use drums, but also bass, guitars and vocals to achieve the same end with their growing army of fans.

Now, with three well-received albums under their bullet-belts (‘Demonarchy’, ‘Blood, Guts and Dirt’, ‘III’), this power-trio are about to unleash their fourth ‘Invaders’. The album features 10 tracks and is concept release based on humans fighting back an alien invasion with a message of fighting oppression, resisting, reconquering, but without knowing if it is really over.

“Everybody who has followed WarCall since our beginnings will be extremely satisfied with ‘Invaders’.  It is our best sound, best production, best song writing and best musical performances.  The new album is a return to the style on the first two albums.  On album ‘’III’’, we wanted a raw approach so it was recorded live in the studio on analog tape for a truly rock and roll feel.  With ‘’Invaders’’, it’s a more polished production with more energy and experience.” says Simard.

“We want our fans to travel into the universe that we create. For a three-piece, we make a lot of noise. We also include scenic elements that remind the audience of a battlefield so the mood is set up from the beginning of the show. And we dress up military style so there is really no confusion as to who is on stage when we play.”

Warcall’s forthcoming album “Invaders” is due out October 13, 2017 via Plan B Music and will be supported by an October European tour of France, Germany, Belgium and Czech Republic.